Color Psychology in Marketing: The Power of the Subconscious Mind

Color psychology plays a prominent role in marketing. But what is color psychology actually? In short, color psychology is the name given to a broad field of research that focuses on how color, often subconsciously, affects our emotions, purchasing behavior and overall decision-making. When used in marketing, for instance, certain colors can influence the way customers perceive a brand in ways that are not always apparent at first sight.

Recommend Reading: Why do Online Shoppers Leave Without Paying? 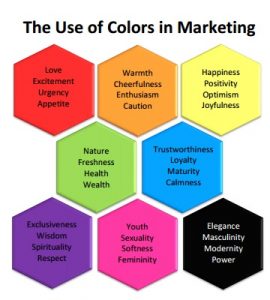 The color red is one of the brightest colors and triggers powerful emotions such as love, passion, energy, fearlessness, and excitement. Further, the color is often used in marketing to create a sense of urgency, as it has a strong effect on stimulating impulse purchasing and immediately attracts attention. This is often taken advantage of in relation to sales. Interestingly, studies have shown that the color also encourages a feeling of appetite and is therefore often found in the branding of Fast Food restaurants, the most obvious examples being McDonald’s and KFC. In addition, the color red physically stimulates the human body, known for raising the pulse and affecting nerve impulses and heart rate, which is why it is often seen in relation to marketing of car brands. The color is also commonly associated with warmth and a general feeling of comfort as well as a symbol of youth and playfulness. Many companies, big and small alike, use red as their primary marketing color. Some examples are Netflix, Coca-Cola, Nintendo and Kellogg’s. A plethora of universities have also incorporated the color red in their logos such as Stanford University, Harvard University, and London School of Economics

Orange has two primary connotations and functions. On the one hand, orange, due primarily to its association with the sun, is used to generate a feeling of warmth and enthusiasm. On the other hand, orange is associated with caution and safety. This is because orange is a strong and clear color that immediately catches the eye. Because orange is quickly recognized, it is often used for call-to-action buttons, where you want to catch the customer’s attention and make them aware of something. Nickelodeon, EasyJet, and Soundcloud include the color orange in their marketing strategy.

Yellow is the color of happiness, optimism, creativity, and positivity. It has also been shown to create a sense of awareness, as it is the most noticeable of all colors to the human eye. Thus, yellow is also frequently used as a color in many sales advertisements and on warning signs. The color’s effect is most powerful when used alongside a darker contrast color such as black. Yellow is especially popular among marketing that revolves around kids invoking a feeling of cheerfulness (e.g. toy stores or kindergartens). In order to break down barriers, color can also be used to make people feel more welcome in a difficult situation, such as is often the case when one is looking for a psychologist. Yellow is often seen among smaller companies, where it may be used as a symbol of hope, but also sees daily usage in many large companies as a primary color. Examples of companies implementing the color yellow in their branding are Nikon, Hertz, Snapchat, National Geographic, and Shell.

From a psychological perspective, the color green has ties to nature and all the different aspects within it. Therefore, it is often used in relation to organic food brands or environmental matters. Further, green is the color of hope, health, and freshness. It is the most relaxing color to the human eye and is widely used by medical and health-related businesses such as pharmacies. Researches have shown a strong primitive relationship to the color as green is referred to as the color of life. Green can also be linked to an increase in power and wealth and is frequently used as a symbol of money, growth, and positivity. This can be seen, among other ways, in the form of growth graphs, statistics, and currencies. In marketing, green is used primarily to suggest a calm and peaceful environment and to invoke a feeling of connection. WhatsApp, Starbucks Coffee, Spotify, and Tic Tac use the color green in their logos, and as their primary color theme for much of their PR and branding initiatives.

Blue is the most favored color worldwide and is especially popular among men. It has a calming effect on the mind and is often referred to as the color of reason. In the field of business, the color is used to symbolize establishment, dependability, loyalty, security, and trustworthiness. Especially among younger people, the color blue is often associated with business practices and a sense of maturity. In the field of government and public health, blue is used to symbolize strength and health. Psychologically speaking, blue has been shown to invoke feelings of calmness, productivity, knowledge, and trustworthiness. Some popular companies that have incorporated the color blue in their daily marketing are Facebook, Twitter, Skype, American Express, Allianz, and LinkedIn.

History shows that purple has long been associated with superiority in the form of royalty. Nowadays, it is frequently used by brands that want to portray their products as prestigious and exclusive. Purple, further, is the color of wisdom, wealth, spirituality, and respect. Studies show that purple stimulates problem-solving areas of the brain as well as increasing creativity. In marketing, purple is often used in relation to sophisticated brands and in fields of beauty and cosmetics. The use of the color purple can be seen in brands such as Liberty London and Hallmark, to name a few.

Without a doubt, pink is the most used color to portray femininity and softness. In marketing, when used in combination with other colors, it can give a sense of youth to the brand. The color pink is often associated with intimacy and sexuality as well as passion and care. Especially beauty brands make use of this connotation. Pink also generates a feeling of comfort and lightheartedness. Effective branding involving the color pink include brands such as Cosmopolitan, Victoria Secrets, and Barbie.

Black is often associated with elegance, power, masculinity, and authority. The color is considered synonymous with luxury and grace. In marketing, it is often used in combination with white to create a sharp contrast and a reduced and simplistic look. The color black is primarily used by high-end fashion labels or technology brands. Especially in the combination with white, the color scheme is associated with modernity and strength. Brands that implement the color black in their branding are, among many others, Calvin Klein, Puma, Nike, Adidas, and Chanel.

Findings focusing on consumer preferences show that palettes with colors from one color family (i.e. different shades of the same color) in combination with one or two highly contrasting accent colors, have the highest success rates when it comes to consumer purchasing choices.

In this context, one can make use of the theory of complementary colors, meaning color-combinations with the highest possible contrast. Such opposite colors are blue and orange, yellow and purple, and red and green.

In terms of marketing, this means using base analogous colors and combining them with accent complementary colors to catch the buyer’s attention. Example of successful brands that use color coordination in their marketing are Fanta, FireFox and Seven Up.

Color Psychology in Marketing: The Conclusion

Color psychology is a very helpful tool when it comes to marketing of all sorts and has been proven to subconsciously affect consumer choices. When used effectively, it can increase the success of just about any business. Use color psychology to help attract potential customers and to eventually build customer loyalty. A business that understands the key principles of color psychology and takes advantage of this will inevitably gain an edge over those who don’t.